How Screen Dependence Is Impacting Children and Families

In recent years there has been a growing body of evidence that Internet Addiction Disorder has become a major health crisis in many of the world’s developed countries (Kardaras, 2016). Although Internet Gaming Disorder was included in the DSM-V (2013) under “Conditions for Further Study,” Internet Addiction Disorder was omitted. However, in an Executive Summary “Technology Addiction: Concerns, Controversy, and Finding Balance” (May 2016, pp.3-14) published by Common Sense Media, researchers investigated how “dealing with devices” affected the parent-teen dynamic.  When 620 adults and 620 children (ages 12-18) were asked the question, “Are We Addicted?” the results were as follows:


Recognizing the potential health hazards associated with excessive screen usage, in 2013 the American Academy of Pediatrics (AAP) issued a policy statement “Children, Adolescents, and the Media”, recommending that “Pediatricians and other health care providers ask two media questions and provide age-appropriate counseling for families at every well-child visit:

The AAP also established several recommendations for parents regarding screen usage including the following:

At times, we joke about our dependence upon electronic screens and we certainly enjoy a plethora of benefits from them. However, in a newly released book “Irresistible: The Rise of Addictive Technology and the Business of Keeping Us Hooked” (2017, pp.26-28)), author Dr. Adam Alter states, “40% of the population suffers from some form of Internet-based addiction.”  He, along with other experts such as Dr. Victoria Dunckley, Dr. Nicolas Kadaras, Dr. Kimberly Young, and Dr. Kathy Koch have identified a host of clinical, psychological, neurological, social, and physical effects of both passive and interactive screen time, especially on children and their developing brains. In “Reset Your Child’s Brain”, Dr. V. Dunckley has identified a new disorder – Electronic Screen Syndrome (ESS) – which mimics Disruptive Mood Dysregulation Disorder (DMDD); however, its causation is directly correlated to exposure to screens and ESS presents with a boarder variation of symptoms (2015, pp.17-18).

There is much to be concerned about.  Whenever I am tackling a challenging health issue and examining causation, I default to a behavior principle: The degree of access or exposure to or consumption of anything is a predictor to the degree of consequence – either positive or negative. As Marriage & Family Therapists, we are entrusted with restoring the health and well-being of our clients. With Screen Dependence, I am suggesting we start by informing clients of the health consequences and then moving them into a more balanced approach with their usage. As is true in addressing other dependent and addictive behaviors, there will be anger, denial, and resistance. In writing "Power Down & Parent Up", I took a family-friendly approach while imparting critical information and providing tools for moving forward. I always remind readers, real power comes in being informed. 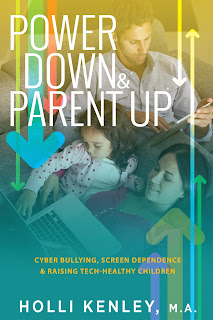 Based on current thinking and research, the following guidelines are strongly recommended in moving towards healthier practices in our relationship with technology and with one another:

1. No screens whatsoever in bedrooms.  This includes adults.

2. All screens are shut off two hours before bedtime, for everyone! Spend time with one another, face to face, really connecting.

3. All screens should be kept in a common area.  This is critical for monitoring and supervising.

4. For families, this is important. Every family must have a Family Online Safety Agreement . By implementing a family agreement, you will bypass years of arguments and confusion over tech usage. More importantly, you will have safer and healthier children.

A similar tool is the Family Media Plan - sponsored by the American Academy of Pediatrics. You can customize a family plan for all your children given their different ages! It's super easy and allows you to add to their recommendations!

For more information on raising healthy “Screen Kids”, take a listen to an informative and restorative podcast series with educators and hosts Dan Kenley and Ed Berger on Insights Into Education.

Screen Kids Podcast
Click link to prior blog. Then, click the link to listen to each episode at your convenience!

oin me at the 2018 Annual CAMFT Conference in San Diego as we explore...
“Human Response To New Technology:
Consumption, Consequences & A Corrective Response.”

Alter, A. (2017). Irresistible: The rise of addictive technology and the business of keeping us hooked. New York, NY: Penguin Press.

How Screen Dependence Is Impacting Children and Families In recent years there has been a growing body of evidence that Internet Add...

WellnessWithHolli
Holli Kenley is a California Licensed Marriage and Family Therapist and a retired thirty-year California State Licensed Teacher. She holds a Master’s Degree in Psychology with an emphasis in Marriage, Family, and Child Counseling. In addition to her Private Practice in Rancho Mirage, CA, Holli also works in the field of psychology as an author, speaker, and workshop presenter. Holli has authored eight recovery books and one novel. She has been a six time peer presenter at the California Association of Marriage and Family Therapists’ Annual State Conferences and a featured or keynote speaker at college level clinical programs, state and national advocacy organizations, and educational institutions. Holli is Wellness Contributing Author for Clear LIFE Inc., an online magazine providing sustainable sources of food, fashion, and healthy living.